I have decided to republish this interview, done in April 2013 for Warwick’s student newspaper The Boar after the success of Sarah’s latest novel The Tidal Zone and her nomination for the 2017 Wellcome Book Prize.

Sarah Moss, author of Names for the Sea, a lecturer in the Creative Writing Department here at the University of Warwick and a nominee for the RSL’s Ondaatje Prize 2013 talks ‘pissing’, place and the pleasures of living in Iceland. 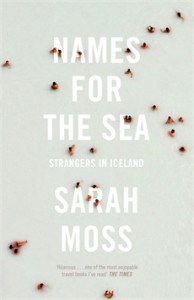 I meet Sarah in her office here at the University of Warwick. Softly spoken and articulate, she greets me warmly and we waste no time in getting down to the questions.

Having just had friends that came back from Iceland, I was eager to get Sarah’s opinions on their exclamations that it’s an undeniably ‘foreign’ country, whereby winter is devoid of light and the landscape is breathtakingly different. Whereas “here we tend to think of it in binary terms, either it’s light or its dark, in Iceland in winter there’s this incredible slow sunrise that lasts 3, even 4 hours”. Already it’s clear to me that a profound sense of fondness for this environment resides in Sarah, who has proclaimed to “like the far North” and whose description of a “pink and westerly sunset and the graduations of light and dark” immediately evoke a stark beauty that no doubt draws visitors in to Iceland.

“The big question”, of course, is what prompted the move to Iceland, the premise and experience of which forms the content of Sarah’s latest novel, Names for the Sea. She recounts a “summer spent there when 19, with a friend”. Devoid of money and food, they set off around “one road that goes all the way around the edge of Iceland [with just] a tent and two sleeping bags”. This was after all “the late 90s” and not a ‘gap-yah’. “No mobile phones, no twitter”, there’s a sense of abandonment, but also of complete freedom. Sarah affirms that they “had an amazing time, particularly for young women to be completely free and completely safe…was an astonishing experience” that prompted her desire to one day return.

After marriage and two children, the circumstances to return and perhaps relive the adventures of young adulthood fell into place. “I was just kind of messing around on the internet and saw a job as a lecturer of English at the University of Iceland… My husband and I agreed I’d go for the interview and just see what it’s like and I went and I loved it again. So we all went for a week, so everyone else could see if they loved it. And in the end we thought ‘let’s just do this’. You don’t get these opportunities very often”. It’s the sort of courage of conviction that many of us lack and which proves very inspiring.

I ask whether the sense of freedom felt so potently the first time around was replicated. Of course “with a husband and two children” in tow, there’s now a responsibility that perhaps wasn’t present at 19. However, “there were different kinds of freedom, not all of which I recognised at the time, just being outside my own culture for a year – anywhere – gave me a kind of freedom and a kind of distance. Being able to walk around the city by myself in the early hours of the morning, even in yours 30s, that’s something you don’t get to do very often”.

A “beautiful” country, but one also recently wreaked by disaster – both of a natural and a financial kind. In fact, Sarah and her family were living in Rekyjavik when the Icelandic volcano, that became a stalwart feature of British news, erupted. Sarah recalls this “bizarre experience”, but that there was no real sense of crisis on those living in Rekyjavik.

Settling in to a new school or University can be difficult, let alone a new country, where language barriers, different outlooks and a new way of life present a whole host of challenges. Sarah admits that it was “harder than expected” and that learning Icelandic was “really difficult”. Working in the English department at the University of Iceland and “of course speaking English at home” no doubt compounded the problem. “My only opportunities to speak Icelandic were in shops and buses”. Much the same to learning GCSE French and realising you can tell someone the contents of your pencil case, but not engage in a colloquial conversation. A case of lost in translation in some respects. Perhaps exacerbating the difficult of learning another language, was that her 2-year old son was picking up words at lightning speech, a process which Sarah describes as “fascinating”. Within 6 weeks, his nursery claiming that he “sounded like an Iceland 3-year old”.

Teaching in Iceland, was no doubt, a very different experience from that of teaching at Warwick. “In Iceland, there are no tuition fees and there are no entry requirements.  It is an absolutely fundamental principle of Iceland that the University is supported by the state and anybody can go. But because of that there’s no control over group sizes, so I had groups of 40ish. And I was supposed to be teaching Creative Writing, so I had to change how I did it…It was a bit of a shock for them and for me I enjoyed it very much”.

Sarah recalls one anecdote involving the word ‘piss’: “One of things that was quite funny was there was only one Icelandic word for ‘peeing’, which is ‘pissa’, so Icelanders will translate it as ‘piss’. So you’re sitting in a seminar and somebody will raise their hand and say ‘I’m just going to piss’ and you just think ‘Oh, right’. (Laughs) But they don’t have that sense of ‘excuse me a moment’, all of that sort of euphemism and because it doesn’t exist in Icelandic, they assume it doesn’t exist in English”.

As aforementioned Names for the Sea recounts the disruption, delight and difference of moving to another country and I wonder whether this book was planned before the venture, or whether it took shape whilst out there. “I knew it was likely I would end up writing about Iceland, but I didn’t do it in order to write about it. I think it would’ve been a very different experience if I had. Towards the end the project was taking shape and I had a sense of the themes I might write about, but I didn’t have a clear structural plan in mind”. This novel also charts Sarah’s transfer from the mode of fiction to non-fiction: “it was extremely good for me to turn away from fiction. Change of perspective, change of technique, it was also the coming together of my academic and my writerly interests. My academic background is in travel writing and nature and place writing, so it was really nice to be doing the form that I’d been studying for ten years. And I’m now more confident about using them in my teaching”.

The teaching Sarah refers to include a module in the Warwick Writing Programme on experiencing place and belonging. I wonder whether Sarah ever felt she could belong in Iceland. “Belonging is one of the things that really interests me academically and creatively. I’ve moved around a lot, I was born in Scotland, grew up in Manchester, spent 10 years in Oxford, 4 years in Canterbury, 1 in Iceland, 3 in West Cornwall. I’m half American. The American half is Jewish Diaspora. Lots of different places and lots of different ways in which I might claim belonging. All of these different ways of claiming place. I certainly want to go back to Iceland. I miss it. I feel connected to it in ways I don’t feel connected to other places, but whether that counts as belonging I couldn’t say”.

Any advice for students at Warwick seeking publication? “Give it all you’ve got – but for a set period. Focus completely and decide how long you’re going to do it for. The great thing about your early 20s is that you can try things with very low risk. There’s no reason why at 22 or 23 you shouldn’t devote yourself to your writing and see where it goes”.

And of course, Sarah is amongst the nominees for this year’s Ondaatje Prize, with the winner to be announced in late May. An “encouraging, exciting, gratifying” honour indeed.

Names for the Sea: Strangers in Iceland was published by Granta at the beginning of July 2012.

Sarah is currently working on a pair of novels.