The New York Times published an article in 2015 declaring Brussels the ‘new’ Berlin, a statement one can’t help but feel has been shoe-horned in to lure readers as opposed to accurately describing its supposed cultural revolution.

If Brussels and Berlin are related, the former is the adorable, well-meaning cousin to the otherworldly, exciting main attraction. The kind of relatives that would have others questioning said kinship.

“For decades, Europe’s buttoned-up political center had a reputation for stodginess and chilliness. No longer: Brussels has quietly emerged as one of the continent’s most exciting creative hubs”.

So The New York Times pronounced. I would proffer that whilst Brussels’ buttons remain firmly fastened, therein lies its charm. Berlin might be loose, hallucinatory and brilliant, but Brussels will quietly seduce you. Here are the sights and scenes that particularly caught my eye…

Situated in the European quarter this large, manicured public park is the site of both impressive architecture, sprawling greenery and perhaps the best spot for views of the cityscape. If you head towards the arch and turn left you’ll happen upon The Royal Museum of the Armed Forces, step inside and ask at reception for entry to the ‘Arcades’ (4 euros), you then walk past the armour and artillery and a few floors up you’ll discover a platform upon which to revel in the unparalleled views of the city.

The Châtelain neighbourhood exudes an air of Parisian grandeur and certainly the businesses in the area speak to that well-monied reputation. Bespoke design and printing shop ‘Le Typographe’ is located on Rue Americaine and has a delectable array of stationary to peruse. Whilst Parlor Coffee is renowned for serving up some of the best caffeine in the Belgian capital, all in suitably serene surroundings. 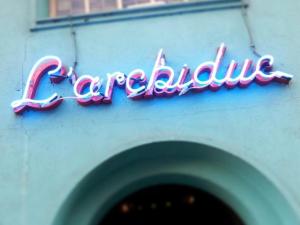 On Rue Antoine Dansaert lies an establishment with an exterior painted electric blue. It’s neon sign reads ‘L’Archiduc’, an intriguingly exotic name with connotations of eminence and majesty. Ring a bell on the street and you enter a steel bubble swing door like entering a bank, or an ornate hotel. This spins you out into an art deco room replete with high ceilings, a half-moon balcony, pillars to the roof, a piano in the middle and a tiny corner bar, a quixotic, beguiling establishment where jazz and cocktails coalesce. When you rotate once again through the door and reacquaint yourself with the pavement, you’ll be surprised to find yourself in the modern day.

Like the Trafalgar of London or the Piazza San Marco of Venice, La Grand Place is Brussels’ central square, surrounded by ornately-gabled buildings and enlivened by the perpetual throng of tourists. After craning your neck towards the sky and doing the customary 360 intake of your surroundings head towards Café Aroma. You’ll pay astronomical prices for any beverage and pastry in this location, but head up to their third floor for a wonderful, window-side perspective of the ongoings down below.

Because I really am 60 years old at heart, no trip is complete without a stroll through an antiques market and a search for some black & white postcards of wherever it is I’m visiting. Le Place Du Grand Sablon, a sequestered, cobble-stoned square is home to such an antiques market every Sunday. Though small and sedate, you’ll be charmed by the curious array of collectibles and if that doesn’t float your boat, the square is ensconced by chocolate shops, so you can search for treasure elsewhere.

Egmont Park is a little-known haven not far from La Place Du Grand Sablon. Amid arches and ivy-lined pillars, compounding the air of seclusion, you’ll find a small patch of greenery, a statue, a fountain and a friendly cafe by the name of La Fabrique. Not that you really need an oasis in Brussels, the city in general has a somnolent atmosphere that perfectly accommodates Sunday brunches and brooding strolls. But were you in the market for one, Egmont Park has you covered.

On a rainy Sunday in a Brussels, I couldn’t think of anything more enchanting than dipping in and out of the antique warehouses peppered along these two parallel roads. The shops are often multi-storied havens, packed to the rafters with kitsch paraphernalia like cigarette dispensers, typewriters, cassette players and brightly-coloured, curved sofas that could easily belong on the set of Mad Men. You’ll lose hours as well as decades as you pore over regalia of times gone by.

Amid handsome facades and refined gentility, its worth noting that there are small traces of the terrorist attacks that occurred in the city back in March. Etchings in concrete and soldiers bearing rifles standing watchfully outside choice Metro stations serve as reminders that despite the cobbled-streets and chocolate shops, terrorism penetrated a tourist’s paradise. It may have shaken the city out of its lackadaisical surveillance, but the air of calmness pervades.

Moderate, historic and the scene of pastoral loveliness, whilst the flourishing café/art scene has given fuel to its rebranding fire, beneath rumours of its hipness, Brussels remains the kind of place you’d happily bring your parents to. Whereas Berlin is still, very much, the bearded, pierced, tattooed boyfriend you’d rather they weren’t aware of.