In last week’s Lenny letter, Lisa Goldberg addressed her experience of solo travel, the circumstances that lead to it and the lessons she learned from it. It was a piece of writing that particularly struck a chord, especially since returning from my 17-day sojourn throughout Europe.

“I just couldn’t stomach the idea of censoring my own life’s experiences based on the absence of a companion. It felt so hopelessly Victorian.”

Preach. If I lived by the tenet that I needed companionship to complete all activities, life would be an organisational nightmare. No more popping or pootling anywhere. Invitations would be sent and declined and altered and accepted for even the most banal of enterprises. Do join me on a turn about the room. I can’t bear to appraise these four walls without a second opinion. Independence would be a distant memory. And if you couldn’t source a companion? Well then experience be damned.

When I started thinking about what I was going to do for a holiday this year, it became wonderfully freeing to sidestep consultation and deliberation and flirt with the utmost decisiveness. Look at me go booking trains, planes and, well no other transport actually, without so much as a second thought. If I wanted to experience parts of Europe, then I absolutely could and what’s more, I could do it uninhibited.

“The experience was abstractly luxurious and soul-nourishing.”

Goldberg hits the nail on the head. It’s the most luxurious trip I’ve ever had. I wallowed and delighted and rollicked in every whim and desire I had. I ate a whole loaf of Czech bread sitting by a stream post-hike because I wanted to, and didn’t have to get up to move until my digestive system signalled that that would be ok. I meandered around an exhibition in Berlin twice, because I’d paid for it, and if I wanted to gaze at pictures taken by Helmut Newton for longer than is the norm, then I absolutely could.

The operative word here being ‘want’. And it’s not lost on me that that is a complete luxury. It’s a product of a selfish culture increasingly fuelled by instant gratification, a culture where the self and individualism is more than ever placed on a pedestal (which, incidentally is not always a good thing. Oh hey there Brexit). Not many people get to do what they want – all of time, or any of it for that matter. Which is why this trip felt so damned extravagant. Not because I sipped on champagne at the opera (I did do that though), but because I allowed myself and was fortunate enough to indulge in a rarity; that of acting upon my inclinations 24/7.

As Goldberg also acknowledges, the idea was met by my mother – not with resistance exactly – but a keen desire to dissuade otherwise, or at least to join me on parts of the trip.

“Honestly this is what I want”, I emphatically replied.

Which is both true and not. It came about as a product of circumstance. I was single and my schedule didn’t align with that of friends. If there’d been a group trip to Morocco going, I would’ve been the first to sign up. But there wasn’t, and circling back to the aforementioned point, I didn’t agree that that meant I should miss out on the experience of travel altogether. So it became what I wanted.

So was it? Did the trip turn out to be that which I’d hoped it would?

It was never going to be the stuff of a best-selling memoir, but that didn’t stop me from harbouring a tiny hope that as soon as I stepped onto foreign soil I’d be living on a diet of enlightenment and ground-shaking, perception-changing discoveries. But as soon as I came round to the idea that I wasn’t Christopher McCandless, or Ron Swanson for that matter, and going ‘off the grid’ wasn’t really realistic, I had the best time.

I’ll be the first to admit, that if by some stroke of absurdity this trip became the plot to a film, it would 100% be rated U. Maybe PG-13. I did go to Amsterdam after all. But ‘best time’ is not some wink-wink lingo for a pleasure-seeking, bar-hopping rampage. Y’all should know me better than that.

It was the stuff of early nights and evenings spent sat on balconies reading Kurt Vonnegut. I traipsed and trailed and traversed through street after cobblestone street, stopping only when the desire for coffee became too resounding to ignore. I brunched and cycled and filled my brain to the hilt with cultural ventures; the highlights of which were the C/O gallery in Berlin, FOAM in Amsterdam and a David Cronenberg exhibition in Prague. Wild it was not. Ridiculously middle-class perhaps. Antiquing and café-crawling were the two most prominent past-times of the trip. But it was bloody lovely nevertheless. I relaxed completely. And though on a couple of occasions I was plagued by the anxiety that I really wasn’t doing everything in my power to be adventurous and meet new people and acquire eye-popping stories that proved to my peers how fun I was, I realised that wasn’t the agenda at all. Maybe another time I’ll go back to Berlin, squad in tow, and show Berghain how to dance, but not today. Not this trip.

It didn’t have to be every colour under the sun and everything I dreamed it would be. It just had to be enough to make me happy, and it was.

The other thing I learnt on this trip, aside from the fact I’m really due a pension and concessionary travel, was to suck it up.

Companionship gives you an immediate outlet for complaint. Of course that’s cathartic and you can bond over mutual woes, but it felt very healthy to avoid that as my go-to reaction. My train’s delayed for an hour? Excellent! I can sit and read my book. I’ve been walking in completely the wrong direction from my hostel? No worries. I can walk myself back. I’ve given myself blisters on day one of the trip? Fucking nightmare, and I complained to the thin air that would listen, but had to get on with it anyway. I never felt like I was hindering or impeding someone else’s fun and if I didn’t fancy seeing a particular attraction, or wasn’t in the mood for cocktails, I was not obligated to pretend otherwise.

“The idea of these solo trips isn’t to be the most swashbuckling lady out there, it’s to show up to your own life, reconnect with yourself as a single entity, and know that you never have to sacrifice an experience because there isn’t someone else there to share it with.”

Goldberg once again proves herself a wise lady. I figured there’ll always be time for more swashbuckling. One such perk of the millennial generation and our ever-receding acceptance of maturity is that I can easily fit in some more debauchery before 30. It’s not ‘now or never’. Just because my 23rd year (and in fact, all those before it) was spent outside of a relationship and beyond the tradition of a family holiday in August, didn’t absolve me of the desire to vacate routine. I wasn’t immune to wanderlust merely because there was no-one to lust with. After 20 or so years of making a lot of decisions to please other people, or at least letting those opinions influence and mould such decisions and quite frankly, wanting to be perceived in a certain light, this trip to Europe became one of the few times I’ve been completely and unashamedly myself.

And I showed myself rather a good time.

N.B. More specific summaries of each place to follow!

Not to be confused with the coffee shops of Amsterdam, there are great many cafés to sample. Here are just three that satiated my appetite and my soul…

Tucked away just off the main road ‘Rokin’ is a pocket-sized bakery, with crates for chairs, trays for tables and a hodge-podge of vintage cushions and hand-drawn murals adding to the air of bohemia. If this all sounds a bit too recherché, the home-made cakes, breads and pastries will win you over. I had a polenta tart and a slice of what could have been carrot, or rhubarb cake. Specificities aside, to say it was delicious doesn’t do it justice. Squeeze in where you can (there’s a couple of crates in their outdoor section overlooking the canal) or take it away, just whatever you do don’t walk past it.

Near Oosterpark and opposite the Tropenmuseum is a chic, upscale café offering brunch from 11am-3.30pm. With its plush surroundings, the prices are pretty decent and you can indulge in an array of sandwiches and continental breakfast fare (N.B. banana bread is a massive thing in Amsterdam apparently, I’ve seen it on practically every menu). Rather strangely, their brunch menu has a Mexican flavour to it, including Huevos Rancheros, jalapeños and other such delights, whilst their dinner menu includes tacos, frijoles, quesadilla and ceviche. I tucked into a grilled vegetable sandwich, on bread so soft it could substitute for a pillow, accompanied by an invigoratingly spicy Blood Mary. Both of the Louie’s, whoever they are, certainly know how to make a hungry girl happy.

It’s fair to say I am enraptured by this cafe and may have boldly claimed it to be the best in the world. I’m in no position to make such an assertion, but I’ll stand by it anyway.

Giving off a tropical warehouse vibe, reminiscent of California, Brooklyn and Scandinavia rolled into one, this renovated cinema in De Pijp has quickly become one of Amsterdam’s most revered establishments. At least among those in the know. 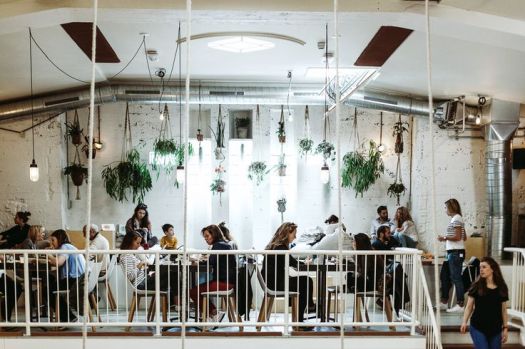 Blending urbane design with beach shack cool, C&C emanates a laid-back ambience that extends from the slouchy, taupe bean bags to the ripped-jeans clad staff. Exposed brick interiors, metal piping, hanging houseplants and lightbulbs traverse the several levels over which seating spans. You can choose to sit at comfy sofas, bar stools or tables tethered to rope. Wherever you decide, the deliciously health-conscious menu is the same. Serving breakfast, lunch and dinner; the overriding theme is very new-wave, clean-eating centric. Think mackerel, avocado, buckwheat flour, and of course, lashings of coconut. I opted for the coconut pancakes, but was just as tempted by their avocado-based offerings and the acai bowl. The only fault was that the portion was pretty small (scotch, rather than American pancake sized), but if anything that only further compliments the taste. Like Carluccio’s and Bills, you can also buy items on the menu from their downstairs parlour, including homemade granola, or grab a healthy lunch from their salad bar. After finishing up my food, the staff were in no hurry to clear away the ta

ble or suggest my departure. Instead I stayed curled up on the sofa, nose-deep in my book and only ambled away reluctantly of my own accord. Beyond the beautiful design and infinitely Instagrammable interior (not to mention the food and the drink), entering Coffee & Coconuts genuinely feels like an escape from the cacophonous conflation of bicycle bells, pedestrian crossing tickers, and nearby construction works.