Luca Guadagnino, an Italian director, who forayed into English-speaking filmmaking with last year’s A Bigger Splash, further proves himself a maestro of sensual, simmering cinema with Call Me By Your Name, starring Armie Hammer, Timothée Chalamet and Michael Stuhlbarg.

Based on Andre Aciman’s novel, this is the story of Elio (Chalamet), a 17-year-old living a placid, almost palatial existence ‘somewhere in Northern Italy’ with his affable, academic parents (Michael Stuhlbarg and Amira Casar), whose affection for their son is abound. In fact, everyone who encounters Elio appears to be smitten, including his on-off girlfriend Marzia. He’s a good-looking boy who transcribes piano concertos and plays them just as beautifully, and drifts around with a nonchalant sulkiness that’s like catnip to teenage girls. However his command is thrown off-kilter when a new student arrives to assist his father, in the form of Oliver (Hammer), a statuesque man of seraphic beauty. And little does he know, as he shows Oliver to his room, but Elio’s life is about to be transformed.

Timothée Chalamet has a natural liveliness onscreen reminiscent of Bel Powley in The Diary of a Teenage Girl, or Miles Teller in The Spectacular Now and certainly he deserves the same recognition granted to Lucas Hedges with his performance in last year’s Manchester by the Sea. His Elio is a hormone-fuelled fusion of braggadocio, playfulness and naiveté, and the more his fascination with Oliver grows, the more we are treated to a cornucopia of emotions, which Chalamet nails every time. He is an intensely watchable actor, and as the camera lingers on his face at the end of the film, in a moment of sheer distress, you sense that Guadagnino is equally aware of this fact.

At once nostalgic and stunningly contemporary, Guadagnino’s 80s aesthetic – hi-tops, Talking Heads t-shirts and Armie Hammer dancing emphatically to The Psychedelic Furs – never overwhelms to the point of pastiche, but instead flavours the film with a greater sense of taboo and restraint. Necessary too. If this had been set in the modern day everything could’ve been set in motion with the coy use of an aubergine, and then a peach emoji. And the film would’ve lost its sense of aching sadness, of precious time being frittered away in the to-ing and fro-ing of pride and desire embattled. Amplifying this heartache is the soundtrack, as supplied by Sufjan Stevens and his soul-baring strumming. 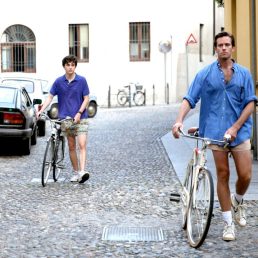 Indeed, language of the spoken and not the texted kind is of great importance to Call Me By Your Name. An early scene in which Hammer’s Oliver distinguishes himself as more than just a thoroughly American, borderline arrogant interloper – all chiselled abs and nonchalant goodbyes – involves the etymology of the word ‘apricot’.

And the film plays up the theme of language and speaking throughout a beautifully subtle script, penned by James Ivory. Elio’s father says “Remember, you can always talk to us”, signalling that both parents are wiser to their son’s maturation than perhaps he gives them credit for. Whilst Elio’s own mastery of French, Italian and English and his glissade between the three only serves to highlight the inability of language to sometimes express what we feel. Guadagnino skilfully depicts these moments of erotic silence; glances across food-strewn tables, glimpses between their adjoining bedrooms, snatches of possibility. Each of these moments is imbued with an almost suffocating intensity, until a crescendo to confession – a beautiful dance of scene, in which the truth is blurted and Oliver asks Elio “Are you saying what I think you’re saying?”

A rush of ecstatic discovery follows, as Elio and Olivier gorge on what they’ve denied themselves for the past few weeks. It’s thrilling, throbbing cinema, in which romance done incognito can only really achieve. And yet, their bond is less tortured and forbidden than gay romance might ever have been on film; secretive, yes, but with a lightness and joyousness that ripples across the screen like the Italian waters which feature so prominently.

This is genuine and generous filmmaking, in the sense that no one here is a villain capable of malice or even unkindness. The characters are human, sure, and with that come flaws and foibles, but there is a deep, warming feeling of goodness that ripens throughout the film and culminates in a tender scene between father and son. And just as you imagine that this a summer Elio will replay in his mind forever more, an apex in which leisure and pleasure coalesced to spine-tingling effect, this is a film you want to luxuriate in forever. If not just watch repeatedly. 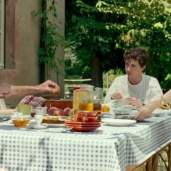 Every frame is dripping with vivid colours and textures; the sticky juice of a peach, the oozing overspill of an egg yolk, the crimson deluge of a nosebleed, the cerulean splashes of the river. It is a world enriched by the halcyon glow memory, spellbinding in its every breath and kiss and quiver.

What with Carol, Moonlight, God’s Own Country and The Handmaiden, queer cinema is finally prospering, and proving to be some of the most romantic films of all.

One Reply to “Film Review: Call Me By Your Name”