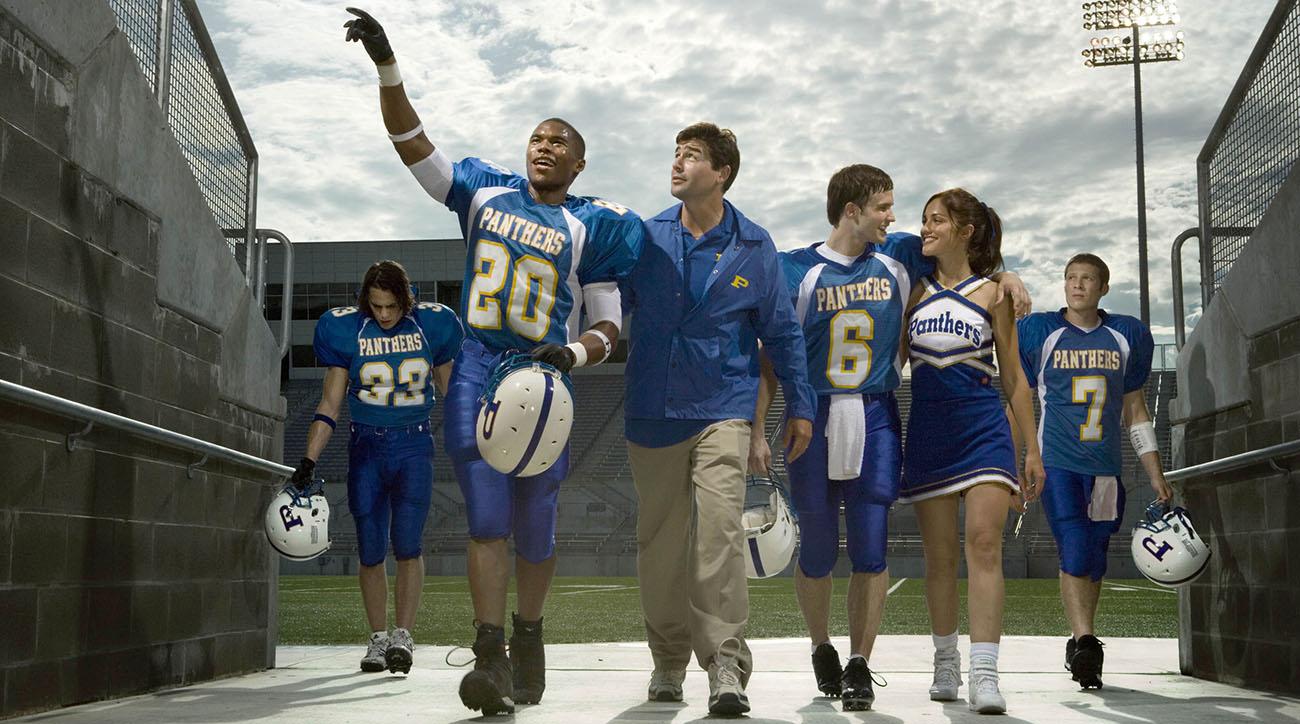 This year saw the 10-year-anniversary since cult-favourite Friday Night Lights debuted on NBC. As a fairly new devotee, I investigate what about the show sees its appeal endure…

The great thing about streaming platforms – and to be honest, box sets before them –  is that TV shows are gifted with a longer shelf life; preserved in ‘recommended picks’ for a new generation of episodic dalliances or fiercely loyal fans.

Stories and characters once banished to the past can live beyond the era in which they aired, ripe for rediscovery and newfound appreciation. Shows that I grew up around and oft heard mentioned during dinnertime discussions; The Shield, 24, Friday Night Lights, The West Wing, I have been able to pluck from nostalgia and finally understand.

I remember my parents trying to describe 24 to me. “You watch someone for an hour in real-time, so that each series makes up a whole day in their life” my mother vaguely summarised, perhaps trying to shield me from the terrorist sub-plots and gung-ho tactics of Jack Bauer. I mistook it for some kind of warped documentary, or a perverse realisation of The Sims. “So you watch them go to the bathroom? When do they sleep?”, I naively inquired. In retrospect, I can almost hear my parents smirking with superiority.

That naiveté extended to my rebuff of Friday Night Lights. Originally airing for 5 seasons between 2006 and 2011, during my prime pre-university years, I was of an age – considered mature – where I would’ve been allowed to join my parents in watching it. But I turned my nose up at the idea of high-school football, heated rivalries and sports jargon.

“You watch One Tree Hill” my Dad protested, willing me to get on-board, “that’s about basketball”. True OTH had bestowed me with knowledge of what a point guard and a layup were, but “its about SO MUCH MORE than basketball” I retorted. I see now why my argument fell on deaf ears. Friday Night Lights far outstrips One Tree Hill in the reputation department, and is most definitely about so much more than high-school football.

It’s not the football games or the tantalisingly close victories that I stick around for. It’s the phenomenally well-written characters. And Taylor Kitsch’s smile.

It’s a paean to identity, morality and family. It’s about romance and first love and making mistakes. It’s about compromise and marriage and making more mistakes. And with a perhaps unrivalled earnestness it tackles the universal theme of following your dreams.

And so the love affair has begun. We spent all weekend together, and I still can’t get enough. I think about Friday Night Lights constantly, especially when we’re apart and I flirted obscenely with the notion of purchasing a Dillon Panthers t-shirt off Amazon the other day.

But why? How has this sometimes corny, slightly outdated show about small-town rituals and sporting obsession exerted a python-like grip on my attention and monopolised every spare hour since I met with the pilot?

The Guardian asserted that “its appeal lies in its optimism”. The Dillon Panthers are the underdogs from the get-go. Written off early in the State Championships, you’re rooting for them to overcome obstacles (paralysis, race, class, tornadoes, rivalry, corruption) all the way to the ten-yard line. But if I’m being honest, it’s not the football games or the tantalisingly close victories that I stick around for. It’s the phenomenally well-written characters. And Taylor Kitsch’s smile.

Across the 35 episodes I’ve watched thus far, the thing that continually astounds me is how well-drawn the individual narrative arcs are and how invested in each story I am. It would be easy for FNL to become the Eric and Tami show; Kyle Chandler and Connie Britton are electrically good as Mr & Mrs Coach Taylor. But FNL routinely manages to span and interweave several storylines, without it ever feeling like characters (or at least those we really care about) are being short-shrifted or for want of a better word, benched. 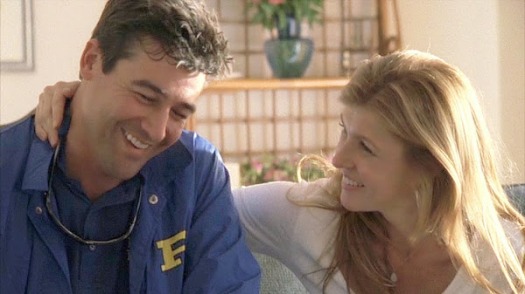 The fact that it excavates past surfaces, and gets to know characters like Riggins’ brother Billy, Saracen’s best friend Landry or Smash’s mother Corrina is testament to the fact that it’s not just the football team and the cheerleaders that get to bask in the spotlight. The show cares about the town as whole and each individual’s role within it. From the pilot onwards we’ve been introduced to the menagerie of Dillon residents whose affiliations to football range from supportive to exploitative. Characters from multifarious backgrounds with manifold intentions exist in Dillon, and FNL doesn’t evince a preference for any type.

Sure, there have been hiccups. Let’s not mention the Landry/Tyra murder debacle, a plotline conceived out of network pressure to amp up the drama, and subsequently the ratings. Or the ill-thought out romantic asides to keep characters treading water (RIP Carlotta and Jackie, victims to circumstance and lazy penmanship).

But the show excels when it sticks to what it does best. And that’s the little things. The frustrations of marriage, and the awkwardness of school corridor encounters with your ex. Julie Taylor’s embarrassment at having her Mum work at her school (something I know only too well), and having ‘the chat’ with her Dad (something I was thankfully spared). When Eric flies off the handle at Tami’s sister for taping over one of his games, the 90s kid in me broke into a rueful grin of remembrance. I’m sure many-a married couple can take solace in Eric and Tami’s sometimes strained, but always loving, back and forth. 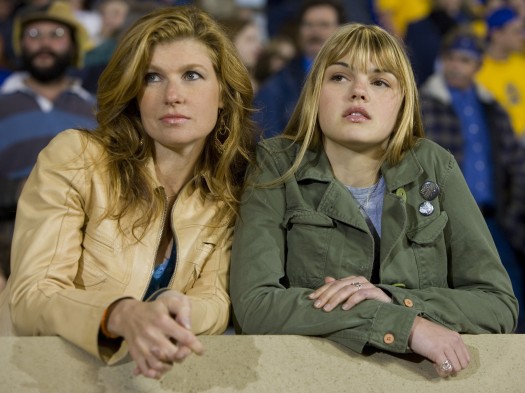 What’s more it doesn’t confine its characters to stereotypes. Who can forget the tragedy-tinged pilot that sees star quarterback Jason Street paralysed after an ill-advised tackle? Convention would dictate that his status is validated with glory on the pitch, but in a show determined to set itself apart, that validation must be discovered elsewhere. It’s a bold move and it was only the beginning.

Church-going cheerleader Lyla Garrity (Minka Kelly), with her shiny brown hair and perfectly plucked eyebrows is perhaps the closest thing you’ll get to cookie-cutter on this show and even she has her moments of tenacity and rebellion. FNL playfully, and continually subverts the boilerplate identities that high-schoolers are meant to fit into. QB1 Matt Saracen (Zach Gilford) is painfully shy and cares more about his ailing grandma than partying on weekends. (Who else felt a bit sick when he experimented with open relationships and kissed two girls in one episode?! So not cool Saracen). Drunken, womanising fullback Tim Riggins (Taylor Kitsch) is part douchebag, part nicest guy on the planet. I’m surprised I haven’t gone into an arrhythmia the amount of times my heart melted at his gestures of kindness and protection.

It’s harder to like other characters. Not everyone on this show is a hero, nor should they be. Smash Williams and Buddy Garrity spring to mind, both of whom teeter on the brink of obnoxiousness on several occasions. But the writers clearly possess an affection for their characters and rather than consigning them to a certain fate, they take the time to make you reassess your judgments. For all of Smash’s locker-room smack talk and juiced up bravado, it pains him to disappoint his single mother (brought to life brilliantly by Liz Mikel), and there’s a glimmer of sensitivity in his dealings with bipolar girlfriend Waverley. Similarly, Buddy Garrity gets his moment of sympathy when, having been kicked out of his house for extra-marital indiscretions, he takes an ex-convict under his wing.

It can’t be said that every appearance is depicted with such refinement. There’s the occasional aggressive thug or opposing team offender that recalls convention, but where it matters, these characters are packed to the rafters with nuances, flaws and redeeming features.

Take for instance, Tyra Collette (Adrianne Palicki). The kind of blonde, lithe beauty who might as well be wearing a tiara, because she has ‘homecoming queen’ written all over her. But both the writers, and Tyra, know she has more to offer than that.

In season 1, she’s working at a diner on the eve of a Dillon Panthers game, pouring coffee and explaining the tiresome ceremonies that plague her football-infatuated town to a cute customer. “Just a bunch of overheated jocks too dumb to know they have no future, fighting over a game that has no meaning, in a town from which there is no escape,” Tyra mutters. This isn’t a girl you’ll find at a pep rally anytime soon.

It’s in these exchanges that FNL explodes commonly-held perceptions. It allows its characters to dream big, to exist beyond the boundaries that a small-town in Texas might impose. Which is true of FNL itself. The show refuses to liken itself to fellow high-school dramas and evokes classic Greek tragedies more than it does the melodrama of other cable shows.

The greatest thing about FNL is that every pass, every victory, every moment of triumph feels hard-earned. Dillon is a town tempered by struggle and the joy of watching this show is seeing the characters make it out the other side. The persistence and confidence instilled in these players by Coach Taylor, and in the students by Tami, is a lesson that we could all do to learn.

As summarised in a Grantland piece:

In an era when sports television was supposedly at its nadir, when elite storytelling was supposedly only the work of prestige outlets like HBO and AMC, Friday Night Lights emerged as the quintessential show about American spirit and uplift at a time when the moral and economic bedrock of [the US] seemed most in doubt.

And though that optimism never extended to commercial ratings, Friday Night Lights has found a home in the hearts of many. Thank goodness – like Jason Street did Lyla Garrity – I gave it a second chance.