A 1962 period piece about Polish nuns might not get ones pulse racing immediately, but let this stark, slow-burning piece de resistance from director Pawel Pawlikowski wash over you and it will be anything but a baptism of fire.

Ida begins with the brevity, austerity and artistry that will quickly become its trademark. It’s landscapes and set pieces are all but empty, reflecting the pious lifestyle of our protagonist, Anna (newcomer Agata Trzebuchowska). Anna is an orphan and novitiate nun on the precipice of taking her vows, a beacon of innocence, simplicity and devoted faith, she has never left the convent and therefore has no experience outside of it. That is until her Mother Superior, in possession of more information concerning Anna’s past than she has hitherto let on, orders Anna to visit her last living relative before wholly committing to the faith. 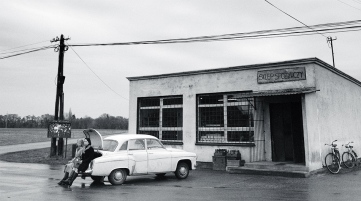 That relative turns out to be Aunt Wanda (Agata Kulesza), a sharp-tongued and cynical former judge, disillusioned by her Communist politics and repenting for having sent ‘Enemies of the People’ to death with a chain of smoking, drinking and fornicating. Wasting no time with saccharine family reunions, she expeditiously informs Anna that she was christened Ida Lebenstein and orphaned after her Jewish parents were killed during Nazi occupation. All of which young Anna takes on-board without batting an eye-lid, as if the second generation just had to absorb the stain of history into their being and learn to live with it. For all their political, religious and characteristic differences, these two women are stoic and brave in their own ways.

And so they embark on a road trip, a spiritual journey of discovery if you will, in the hopes of finding where their loved ones are buried and how they came to their untimely end. Together the women paint a picture of past and future, Communist and Catholic, embittered and naïve, and whilst they begin their journey as disparate entities, there is a sense that by the time the credits roll they share more than a surname.

Rather than alienating us, as perhaps German expressionism does, Pawlikowski’s decision to employ black and white cinematography engrosses and immerses the audience in the time period. Moreover, the austere and striking look of the film augments the atmosphere of loneliness and haunting, rendering us sympathetic to a nation in mourning.

There’s not a shot that isn’t meticulously and masterfully constructed. Each frame is its own masterpiece, recalling Vermeer, Godard, Bergman and the French New Wave, but revelling in its own abstraction. This is fiercely original cinema. Vast, empty skies and cavernous corridors often dominate the frame, reducing the people in it to specs on a greying horizon. Faces and heads are frequently relegated to the bottom third of the frame, again minimalized in contrast to augmented and expansive interiors. There is one scene set in a hotel wherein the entire ceiling appears as if to balance on Anna’s head. Indeed the weight of chapel columns, building facades and gloomy weather seems to form a perpetual cloud over these people; Wanda too, seems consistently enshrouded by a cloud of her own smoke, resembling the despairing fog that cloaked the post-war Polish nation, and perhaps a subtle reminder of Poland’s complicity or perpetuation in certain aspects of the war.

The holocaust casts a long shadow over Pawlikowski’s film, and interactions – especially between Wanda and others – simmer with bitterness and distrust. She is unsurprisingly and perhaps justified in her caustic wariness, wherein an overwhelming aura of hardship, sadness and residual tension threaten to spill over at anytime.

Like it’s aesthetic, the script is sparse and all the more effective for it. Silences echo around vast buildings; metal clattering against ceramic as the nuns consume soup in almost oppressive quiet (Ida’s escaped, girlish giggle is fantastically defiant in a latter scene of similar acoustics). What’s left unsaid in dialogue is more than filled in with striking, enduring close-ups. Pawlikowski frequently closes in on Ida’s face, a blank canvas for corrupted innocence, temptation and conflict. There is a beguiling platitude to her expressions and yet her eyes flicker with bouts of knowing and intensity, and she reveals a capacity for rage and passion that belies her ethereal stillness; perhaps symbolic of Poland’s dormant vivacity after years of oppression. 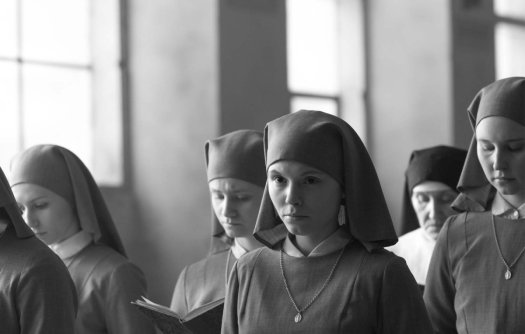 From the outset, this is a film that intentionally and expressively uses silence, portraiture and composition – its style is its substance. In an age of increasing studio budgets and awe-inspiring special effects, Ida provides a welcome counterpoint; an exercise in restraint and austerity that reveals the power of saying a lot with a little. Its stillness and focus demand your attention, but rewards it with a film so utterly captivating you almost wish the running time was longer. 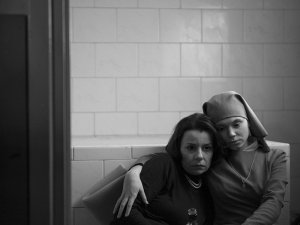 The two Agata’s are astonishing in their respective roles, and with piercing stares, wry smiles and blind determination, carry the film on their shoulders. Ms. Kulesza’s Wanda is poised, sardonic and ruthless, but capable of excavating past her tough exterior to reveal a grieving woman at breaking point. Ms. Trzebuchowska, (a university student discovered in a café by a friend of Pawlikowski’s) is a serene and enigmatic screen presence. She appears to us a clean slate, with no history to her name. As she gradually unveils her identity and carves out her own future, Trzebuchowska’s eyes sparkle with curiosity and her lips curl with mischief and one realizes they have become fully invested in this young woman’s journey.

Realism is further accentuated by the sound design, which only uses diegetic music and has a startling clarity and delicacy to it. Wanda plays sombre and elegiac classical Mozart, which is punctuated by the haunting jazz anthem ‘Naima’ by Coltrane, over which Anna and a handsome young saxophonist promising excitement connect.  Dialogue or music is often layered with external elements, such as wind or rain, as if the omnipresence of the outside world will always linger; the wind rattling eerily through the forest, the severity of spade hitting ground as bodies and truths are uncovered and the chaste clinking of holy cutlery in the convent. This complexity of sound, with clarity of image coalesces to resonant effect.

For all its measured, mannered compositions, there is an abundance of emotion present within each frame and its understatement endures even in the most tragic of scenes. I doubt whether anything can prepare you for such an ending. A truly eye-opening experience for all involved.

Verdict: Haunting, startling and revelatory. As much a beautiful and tragic coming-of-age story, as it is a stunning feat of cinema.