It would be degrading and reductive to outline what might consist of a ‘feminine aesthetic’. It would suggest that cinema about, or written/directed by women is operating solely in contrast or in counter to, the dominant masculine style, rather than merely – and necessarily – portraying the diversity and difference of our experiences.

These films selected below, though by no means an extensive list, go to demonstrate the generic and stylistic variety that female-centric cinema is capable of. It goes to show that women are by no means limited by their gender and that women do not constitute a certain or specific type of stylistic output. In my opinion, these films serve to highlight our complexities, difficulties and capabilities. That heroes can be female and that they can take many forms…

Director Kelly Reichardt is well-known for her reworking of genre to encompass a female perspective. In Meek’s Cutoff she takes on the Western and subverts it’s inherent theme of rugged masculinity, by placing Michelle Williams’ Emily at the forefront of a group of pioneers advancing westwards into unchartered territory. The camera emphasises the female experience and in doing so carves a space into the American landscape for a gender otherwise marginalised.

Shot on location in the Ozark mountains of Missouri, Debra Granik’s films follows Ree Dolly (Jennifer Lawrence’s breakout role) in her perilous attempt to track down her absent, meth-addicted father, with the aim of protecting her home and family. Taking charge of her economically-deprived destiny, Ree’s search for answers resembles that of a lone cowboy, crossing boundaries both literal and metaphorical to find meaning in the world. Labelled as ‘rural noir’, Granik’s film disrupts genre conventions in its placement of a female protagonist in a hostile, violent and depraved world.

A seminal feminist film, Thelma and Louise are two best-friends who take to the road in a symbolic and literal two-fingers up to gender conventions and authority. Part road-movie, part crime-caper, these two women embark on a journey of liberation as they become both increasingly violent, and assertive. Driving along an open road in their T-Bird convertible and getting the last word over the cops on their tails, Thelma and Louise rebelled against genre, and societal expectations.

A female Rambo of sorts, our leather-clad, bow and arrow-wielding heroine Katniss Everdeen has become a symbol of endurance, indestructibility and strength. Following in the footsteps of Ellen Ripley, Lara Croft or even Joan of Arc, Katniss subverts the notion that the action genre is an arena reserved solely for her male counterparts. Some film critics have even compared her to the archetype of the Western hero as embodied by John Wayne and Clint Eastwood – a marginalised loner, existing on the fringes of society. Most importantly, Katniss seems to transcend gender boundaries, acting as both surrogate mother to her younger sister Prim and assuming responsibility as bread-winner for her family. Ultimately, she upends the rules; both of the Hunger Games and the action genre.

The final frontier, and indeed, the moon, were advertised as places ‘where no man had gone before’, let alone women. In 2013, Gravity turned the tables – and pretty much everything else – upside down, not least in it’s depiction of a female astronaut. Dr. Ryan Stone (a name which begs the question whether she was initially written as male), must scrape together all her resources to survive against the odds when a space mission goes awry. As narrative progresses she transforms from a nervous, panicked and inexperienced astronaut, to a capable and determined one (with just a little bit of help from George Clooney). Her gender is irrelevant to her ability, something which makes for a refreshing watch. 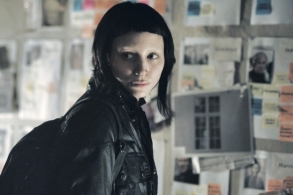 Emotionally fragile, but physically formidable, Lisbeth Salander is perhaps the fiercest female on this list. TGWADT navigates the world of corporate corruption through the eyes of inked, pierced and pissed-off computer whizz Lisbeth, as she sets about getting revenge on the men that abused, and institutionalised her. In the meantime, Lisbeth proves herself just as commanding, clever and quite frankly terrifying, as any male vigilante on the big screen.

In the Coen Brothers’ remake of Charles Portis’ novel, True Grit follows the traditional Western trajectory of revenge, against the backdrop of a harsh and desolate landscape. Finding herself in this hostile environment of whiskey-swigging, gun-toting, foul-mouthed cowboys is 14 year-old Mattie Ross, who must prove she has enough grit to survive. And boy does she. Mattie has no interest in her male counterparts for protection or otherwise, and continually demonstrates that she has the confidence, competence and sass to outsmart them all. 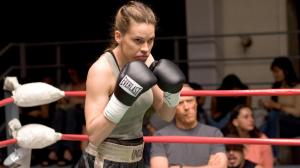 The boxing ring is a place where blood, sweat and spectacle reigns. Where violence is a language and machismo is the currency. Hardly deemed a place for a woman. Million Dollar Baby trod relatively new territory then in depicting the trials and tribulations of Maggie (an Oscar-winning turn from Hilary Swank), a working-class woman who conquers the boxing world. Whilst she masculines herself to trainer Frank’s tastes, to see a woman in the ring at all is certainly a change of pace and a forceful blow to the notion that only men can put up a fight.

Wars, and by extension, war movies, have typically been the domain of the male population. However, this Kathryn Bigelow helmed exploration of the CIA’s search for Osama Bin Laden represents and honours the real female CIA operative whose dedication was key to his capture. Jessica Chastain, as Maya, is on formidable, snarling form. She imbues the characters with stoicism, steely resolve and unshakeable determination. In some respects she is both the hero and the villain of the story, employing controversial interrogation techniques to achieve her aims. But the point that Bigelow successfully drives home is that she is the lone wolf; the sole female mole at table of ego-driven male officers and thus a symbol of exceptionalism.

This is by no means an extensive list. Please share your own suggestions for films which subvert a masculine genre!