Despite being Ralph Fiennes’ second directorial effort, with himself starring as acclaimed novelist, philanthropist and public figure Charles Dickens, this is the story of how Nelly Ternan became his lover, and this is Felicity Jones’ film.

It is she that the film opens and closes with, as we find Nelly operating under a different name, working as a teacher and telling her husband Dickens was a childhood acquaintance. It is her anguish, isolation and desire that the Abi Morgan penned (based on Claire Tomalin’s novel) biopic explores and through her position as Dickens’ lover, muse and confidante that we discover the women that lived in the shadow of a national treasure.

From the moment we observe Nelly’s all-black ensemble, slightly aged face and brisk walking pace across a vast and empty beach, there is a sense of her being haunted by the past. Thus, when the film takes us back to Dickens’ and Nelly’s first meeting, there interaction thereafter is tainted with the torment and tragedy that is to follow.

Felicity Jones turns in a mesmerising, heart-wrenching performance as the beguiling ingénue, who captivates the self-absorbed Dickens with her clarity and sensitivity. Her subtlety and sadness match the tone of the film perfectly, both saying more in glances stolen, and secrets untold.

The scenes between Nelly and Charles are refreshingly non-sexual, and focus on their intellectual compatibility rather than their bedroom antics. Indeed, one particular scene that sees Nelly torn between her love for Charles and her social reputation shows incredible restraint in not allowing the protagonists to kiss. The longing gazes and yearning caresses are tantalisingly painful to watch; the characters almost afraid to cross a line from which there is no turning back.

After flamboyant, vivid turns in The Grand Budapest Hotel and Coriolanus, Fiennes demonstrates his versatility as both a director, and actor, who has accomplished restraint and delicacy in his treatment of this romantic partnership. His Charles’ is vexing, cruel, and narcissistic; a man who boards up half of his house to physically separate himself from his long-suffering wife Catherine, who admits he loves his audience more than his family. And yet, his passion, joie de vivre, and seemingly genuine interest in the welfare of the underclass, allows us to understand Nelly’s attraction to him. 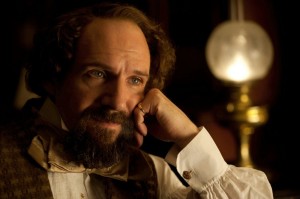 Their relationship is at once paternalistic (a facet perhaps aided by the fact Fiennes and Jones played father and daughter in 2010’s Cemetery Junction) and tender. Conversations had by candlelight and secluded country walks cement a romanticism, rather than perversity to their pairing – she was 18, and he 45 when they met. And both actors bring these real people back to life with assurance, charm and poignancy.

Fantastic support is found in the performances of Kristin Scott-Thomas, as Nelly’s reluctantly complicit mother; Tom Hollander, as Dickens’ friend and colleague – himself living with a mistress and finally, and the astounding Joanna Scanlan as Dicken’s rejected wife. Her finest moment comes when she is forced to confront Nelly upon Charles’ order to deliver a present to her. Ouch, indeed.

The pacing of the film is almost irritatingly languid, with Fiennes choosing to focus a great deal more on their introduction and gradual getting to know one another, rather than their actual relationship – which is in fact boiled down to the denouement.

Nevertheless, the film manages to wonderfully capture the Victorian era, replete with 4am revelry, the poverty of the working class and the restrictions and shame that women were subjected to. And as with many period dramas that detail the difficult of a forbidden affair, potency is found in the moments and words left unsaid. Fiennes’ acknowledges this to devastating effect.

Verdict: Assured and sensitive, there are echoes of ‘Bright Star’ and ‘The French Lieutenant’s Woman’ as Fiennes’ painstakingly unravels the makings of a forgotten muse. With a keen grasp of the novelist’s talent and influence, as well as the era, The Invisible Woman makes for an aesthetically pleasing and engaging, if not entirely pleasurable cinematic experience.