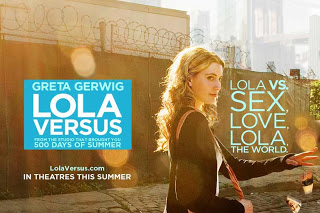 I recently read a review where someone chastised the recent glut of indie filmmaking as subjecting audiences to ‘drowning in a culture of quirk’. And to some extent this rings true. Quite a lot of films these days brand themselves on being hip and cool and counterculture, perhaps without considering what that really is or just trying too hard to be.
Lola Versus could be accused of being one of those films. The female protagonist Lola (Greta Gerwig) is having an existential crisis. She’s still obsessed with her ex-fiancée Luke (Joel Kinnaman), sleeping with his best friend Henry as well as a weird salmon guy who designs prisons and has a monster dick. (Her words, not mine) and just wants so badly to figure out who she is. Nothing embodies the notion of #whitegirlproblems as much as the ‘anti-heroine’ who must cancel her destination wedding to Peru to choose between three guys and ponder her heartbreaking situation whilst partying her way through New York. Gosh her life really does suck. Plus the choice of who she should be with is clear as soon as her douchebag but deliciously good-looking fiancée appears on the screen (yes Joel Kinnaman I’m looking at you). So she spends the entire narrative drunkenly, highly and sullenly bemoaning her way through a series of mishaps and fuck-ups, until she’s finally told to sort her life out. So she does some therapy, some yoga and detoxing until she discovers she really needs to focus on ‘her’ now.
The film attempts to have heart and honesty, looking at seemingly unglamorous people who smoke weed and make mistakes and are about to turn 30 and really don’t have their shit together, but it still feel superficial and glossy and like nothing one can actually relate to.
First let me get it out of my system how annoying these tropes of quirkiness have become in films. The four main characters live in New York and all indulge in artsy careers that don’t really seem to take up much time and yet fund hedonistic lifestyles and achingly cool apartments. Lola is a PhD student and writer who studies French poetry, her fiancée is an artist, her best friend an actress and her fiancée’s best friend is in a band. They’re so ‘indie scene’ it’s actually generic. What’s worse the characters, for all their zippy, random charm and heart-melting smiles (yes Joel Kinnaman, I’m still looking at you) are pretty self-absorbed.
For me, the issues lies in the fact it wants so much to be anti-traditionalist and bucking the trends of the romantic comedy genre where the guy gets the girls and everything is dandy in the end but just instead it ends up being a bit meandering, aimless and frustrating. The fact that they’re all rather unsympathetic doesn’t help any.
It seems that the broad intent of Lola Versus, trying to take an honest look at life and love in the big city, parallels what Lena Dunham is doing with the new HBO series Girls, just with less clarity and hilarity. Lola is seeking identity and meaning, finding her purpose in life outside of a relationship, but as much as it should feel like a hoorah when she decides to take control of her life and reject Luke in favour of herself it lacks verity and believability.
Beneath the obscuring layer of idiosyncrasy and whimsicality this film has coated itself in lies some funny dialogue and enough warmth and tenderness to stick with it for all of its 90 minutes, due to some endearing and engaging performances from the cast. But for all its intended profundity and reassurance of existential anxiety one can’t help but feel that rather than being refreshing it’s tiresomely familiar.
A well-trodden path that does indeed drown itself in an excessive dose of quirk.