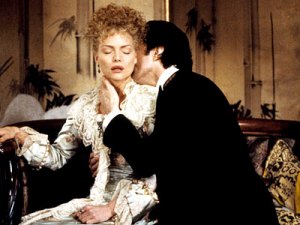 I have just indulged in what could be considered the perfect afternoon. Often, (it mostly occurs at work) I wish that instead of being where I am I could be curled up at home watching a movie. This afternoon that wish became a reality. You would be forgiven for thinking it the dead of winter when taking into account my surroundings; fire cranked up, hot chocolate on hand and wrapped up in my blanket and what better to accompany this cosy condition than a period drama. Just my luck then that Martin Scorcese’s The Age of Innocence was on tv.

A sprawling, tragic romance, The Age of Innocence tells the story of New York in the 19th century and the conservative socialites whom inhabit it. Daniel Day Lewis is Newland Archer, engaged to the docile May Welland, but increasingly besotted with her cousin Countess Ellen Olenska. Scorcese explores this world with lavish detail, paying as much attention as to the locations as to the characters. Before entering the ballroom for example, escorted by omniscient narration we are guided through stately rooms filled with sumptuous art, furniture and guests. This serves to place the film firmly in its context; that of aristocratic New York, but also to signal the suffocation of such an era. Its a world of restraint, where one’s actions or indeed inactions are guided by the morals and values of the majority. It is interesting to note that many of Newland and Ellen’s passionately reserved encounters occur outside, where the boundaries of society still exist but perhaps less so. While never consummating their affair, the fervour of it is felt no less. Seemingly inconsequential movements are imbued with an erotic potency; the kissing of wrists and shoes for example, the camera lingers and perfectly captures that sense of longing and desire.

What is also interesting to note is how one’s response to each of the character’s develops over the course of the film. Our first glimpse of Countess Olenska is from afar in the opera house; a motif throughout the film and she appears to us glacial and distant. However gradually she becomes the most passionate and expressive character of the film. Moreover, initially we feel sympathy for Newland; a man trapped by his surroundings. He continually dotes on and compliments May and maintains a pleasantness throughout. But dishonesty eventually creeps into his life as he trys to find ways to see Ellen and though our sympathy is once again restored for Newland by the conclusion, there is also a passivity within him that perhaps portrays him as undeserving of either woman. Then there is May, who intially embodies the title more than anyone, but beneath her vapidity; commenting on people’s dress and mannerisms or cutting her husband off because he talks of business or his clever acquaintance is ‘common’, is depth, integrity and more importantly deviousness. It is this character development that is part of what makes The Age of Innocence such a magnificently compelling film, as well as contributing to the delicate and heart-rendering twist at the end.

The opulence of the era is beautifully conveyed through both the richness of colour and music and is an impeccable observation of high society and its moral codes. Martin Scorcese, though best known for his epic gangster films, shows a keen eye for detail; depicting the nuances of a rigid society, the glances, the smiles, the polite gestures e.t.c He also employs several cinematic techniques that highlight the subtext of the film, at times subtley and others not. I found the spotlighting to be a little amateurish, however his overlapping of images and slowing down of some sequences are very cleverly achieved, not a manipulation the eye but an encouragement for the spectator to focus on the detail. One particular scene that I felt exemplified this was when hoardes of men are seen to be walking in the wind, each holding their hats in such a similar fashion than none are distinguishable. They all look like the other.

The performances are also of an exquisite standard. Michelle Pfieffer has never looked more arrestingly beautiful and perfectly captures the emotion and romanticism that offers Newland an escape. Ellen never hides her feelings, freely admitting the dullness of certain company or crying in front of Newland. In contrast Winona Ryder as May is beguiling, putting her Bambi like features to perfect use as a shy, sweet facade for her manipulative streak. Then of course is the consistently outstanding Daniel Day Lewis; often he portrays slightly eccentric, raging characters in which he displays ever emotion under the sun and yet here he exercises complete restraint and propiety; as well as the sadness and regret of his lifestyle. The film is also strung together by a brilliantly cynical narration that exposes the true underbelly of society.
An accomplishment in cinematic storytelling, this is a beautifully tragic film, whose many layers unravel to reveal what is a stylistic and poignant masterpiece. 5 Stars and indeed a perfect afternoon.